Edit
watch 01:36
We're Getting Mutants in the MCU - The Loop
Do you like this video?
Play Sound

A futuristic-looking video communication system called the Picture Phone was a prominent feature on the show, remaining virtually unchanged throughout the series, except for the phone's ringing, details of the lip-doors, and interior. The interior walls of the Picture Phone are a giraffe print. A large phone booth-like area in the shape of a woman's head was the exterior, with a shower curtain in-between the face where her nose would be. The lips served as saloon doors that could be opened and closed at will. Inside was a cathode ray tube television monitor for viewing the individual on the other end, a tin can handset, several controls for the user to pull, press and twist, and lights to brighten the inside (done so by pulling a lever resembling a red rod with hand-grip indentations). In seasons 2 through 5, on occasion when Pee-wee would turn on these lights a coiled spring sound effect could be heard. The CRT monitor was enclosed in a wood frame, similar to many televisions of the 1950s to the 1980s. Also, a pull-down background was often seen; it parodied a lot of modern-day artwork, such as American Gothic (as seen at the end of Miss Yvonne's Visit). On some occasions, Pee-wee wore a silly hat that matched the background's theme, such as a pirate hat or a beach umbrella. The phone's "ringing" was accompanied by a flash of shapes and patterns on the monitor. The interior only had one seat, but three people could get inside it, as demonstrated in the Store. The "conversations", which implied the existence of other "Picture Phones", were actually live video films of any character that Pee-wee "called". He would usually call "I'll get it! I'll get it!" and answer "Pee-wee's Playhouse. Pee-wee speaking." before the caller's image would appear on the monitor. The phone itself was always an empty tin can of Del Monte Fruit Cocktail (in the Ice Cream Soup episode, Del Monte Sweet Peas), connected to a telephone cord (hence the name Picture Phone). At the beginning of Accidental Playhouse and the start of Pajama Party, the Picture Phone's ringing was also accompanied by horns blaring and buzzer sounds, respectively. The episode Sick, Did Somebody Say Sick? shows us that there is a keypad that is used to dial numbers, but in later shots of the viewing screen and controls for the Picture Phone, the keypad is nonexistent.

In one of the commentaries for the Christmas special, the Picture Phone was described as being "way ahead of its time" for its capability of showing picture with a person's voice when calling them on the phone.

The Picture Phone booth itself appears on the cover of the season 9 disc of the complete series DVD boxset. The Picture Phone was first used in Ice Cream Soup all the way up to Camping Out.

The Picture Phone was designed by Ric Heitzman.

Some of the people called/calling on the Picture Phone:

Conky, Pterri, Globey and Jambi are a few of the characters that haven't called anyone on the Picture Phone in the playhouse, but Jambi called Pee-wee from another phone while on his vacation. 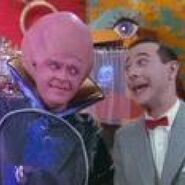 Jambi calling while on vacation

Pee-wee and Roger, with the season 1 design of the Picture Phone in the background. Notice the original red seat.

The Picture Phone, as seen in seasons 2 through 5

Closeup of the Picture Phone (seasons 2 through 5)

Using the Picture Phone to pull a prank on Dina Shore

Pee-wee and the others save Carl from nearly dying at sea.

The Picture Phone is behind Pee-wee in this production photo.

Someone's model of the booth itself

The "controls" of the picturephone as seen in the end of "Fire In The Playhouse" just as Pee-Wee was about to place the emergency number sticker in place.

The "Please Stand By" graphic when Pee-Wee was put on hold during a call to Dr. Jinga Janga.

From the "Ice Cream Soup" episode, Pee-Wee on the line with Captain Carl. Note that the can receiver has a white rope instead of a coiled telephone cord and the Del Monte product is Sweet Peas instead of Fruit Cocktail as seen for the rest of the series. Also, notice that "Del" in Del Monte was partially covered. The Del Monte logo on the Fruit Cocktail can is completely blanked

Del Monte Fruit Cocktail with brand name blanked out. Note that the can receiver now has a coiled telephone cord.

The Del Monte Fruit Cocktail can as seen in the picturephone.

The Picturephone appeared in an auction at Prop Store Los Angeles that ended on December 1. 2018. It sold for $9,375. You can still see the photos at the propstore site.

The picturephone seen at the Keystone Comic Con

The Picturephone in use

Community content is available under CC-BY-SA unless otherwise noted.
Advertisement