Paul Reubens was given many responsibilities while working on Playhouse.' One of the more involved of these was to organize and attend meetings to arrange the release of licensed Pee-Wee Herman  merchandising. Starting in 1987, dolls, puppets, t-shirts, and VHS tapes were released alongside and far after the second season. Many distributers  were considered and used, including Matchbox toys, of Hot Wheels fame, and JC Penney.

Matchbox signed on to, among other things, release a line of specialised plush which included  Chairry, Pterri, and (originally) Penny. These dolls were different because of certain features that they included, such as Chairry's talking and rolling eyes, and Pterri's wing flapping and moving eyes. Penny's doll didn't have any known actions because her model was only made into a prototype. Timothy Young, who worked on the doll, said that "The doll was never was never produced because the marketing department at Matchbox felt that since she didn't interact with any of the other Pee-Wee characters, she was not viable."

Matchbox also created the famous 18" talking Pee-Wee Herman with a pull string. This classic mechanism was unique, but didn't last long. Sadly, very few of these have maintained their original speech power. The most common, besides it not being able to speak at all, was that it speaks too fast. 13 years later, the doll was rereleased by Matchbox. However, it's talking was activated by a press of the stomach. He was also released with Billy Baloney and Vance the Pig. Out of all the Playhouse merchandise, the most rare were the 48" Pee-Wee (which was unable to talk), and the full sized Chairry to go along with him.

Finally, Matchbox released 6" action figures of the majority of the characters. The humans and Chairry  were just average posiable figures, but the medium sized puppet characters were given wind-up motors, and the smaller puppets were just tiny figurines. All of these toys fit perfectly, and were designed for the ultimate piece of Playhouse merchandise: The Deluxe Playhouse Playset. This toy was made from mainly plastic and laminated cardboard, and was in the image of the Playhouse set. It included a working front door, dancing Flowers , talking Mr. Window, pop up Floory, rotating Clockey arms, holographic Fish, the television set, the kitchen booth, table, and Refrigerator, Puppetland, and a working door for Pee-Wee's Scooter, which was included as well.

JC Penney carried a line of exclusive Pee-Wee Herman clothing. Blue jeans, trading cards, Halloween costumes, t-shirts, chloroforms, sweaters, and even party products were produced! All under the 'Official Pee-Wee Brand', which was labeled in the corner of each box, rapper, and package. Original videotapes, or VHSs, were released of the first season, but it wasn't until 1997 when the rest of the episodes and the Christmas special were put out. After that, DVDs of the show came in box sets, Vol.1 and Vol.2, in 2004.

Besides the Penny doll, there were other ideas that were abandoned before reaching the market. Paul Reubens had an idea about selling Ms. Yvonne wigs and makeup, but nobody wanted to produce them. Another was to make Pee-Wee colognes, but nobody would produce them either. However, one product nearly made it to stores: Purina brand Pee-Wee Chow (breakfast cereal intended for kids to eat on their hands and knees). The cereal made it all the way to the blind taste test, but there was one problem. The kids hated the taste of the food, and refused to eat anymore.

"In the 1980s, a lot of shows were actually based on toys." says Judy Price." The toy came first and then the show. There was no merchandising out during the Playhouse's first year. He wanted to do a show, and do a good show, and then merchandising would follow." 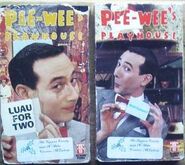 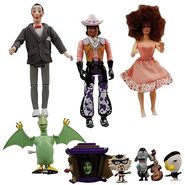 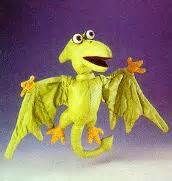